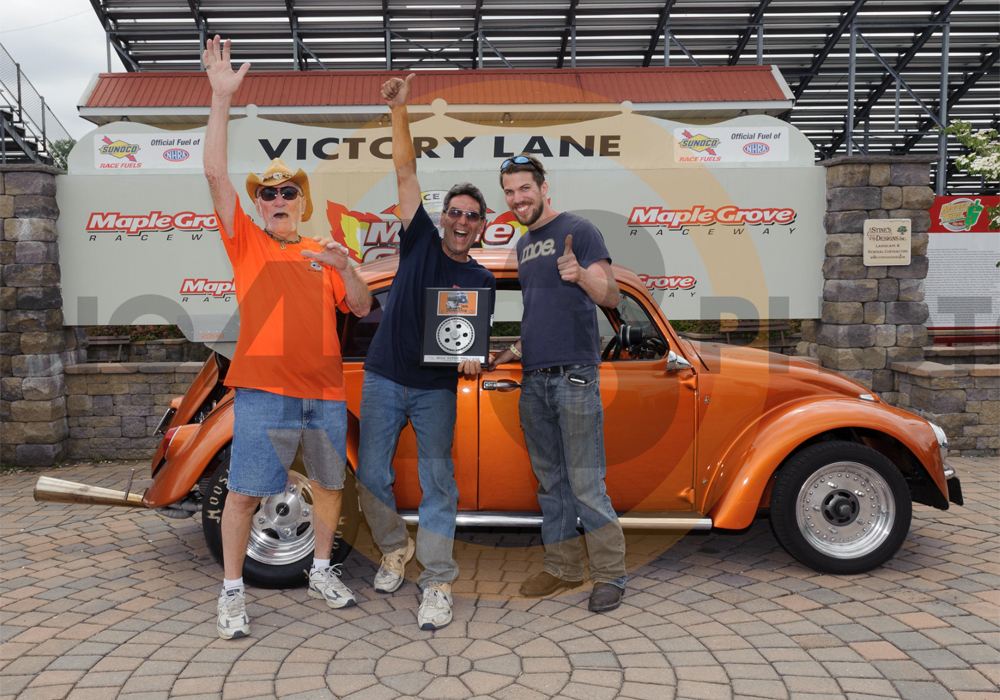 Maple Grove’s race took place with 15 cars showing up for the Pierside Parts I/Gas and 13 cars making it to Round #1. Our finalists were Rick Lazaar from Bethlehem PA in his copper street bug dialed 7.99 and Jonathan Abrams from Manassas. Rick had the better light and forced Abrams to break out and scored the win. Unfortunately for Rick he did not sign up for points so that will put Jonathan in the current points lead.

This race also featured the debut of the A/Gas Heads Up 1/4 mile class. There were 10 cars attempting to qualify for the Jerry Lewis sponsored class (3 water cooled cars), a pro stocker, turbo street bug and dedicated race cars rounding out the field.

After it was all said and done, Jerry and Chris would meet in the final with both cars hunting towards their respective guard rail/center line and Chris winning with a 9.87 to Jerry’s 10.07 while he was pedaling the car on and off to stay in his lane.

Our next race is Saturday August 22 at Capitol Raceway in Crofton MD. This is usually our largest turn out and we look forward to seeing all the guys come out for the BIG ONE at Capitol!  The gates open at 10AM.  We will have our own lanes and race amongst ourselves but there will be v8s on the grounds, so that means the track will be HOOKING and have lots of traction. There will also be a top 20 all vw car show being run by the track so tell your friends to bring their car and hang out!

If you have any questions, feel free to ask.  All payouts are on our web site www.vwheritageseries.com