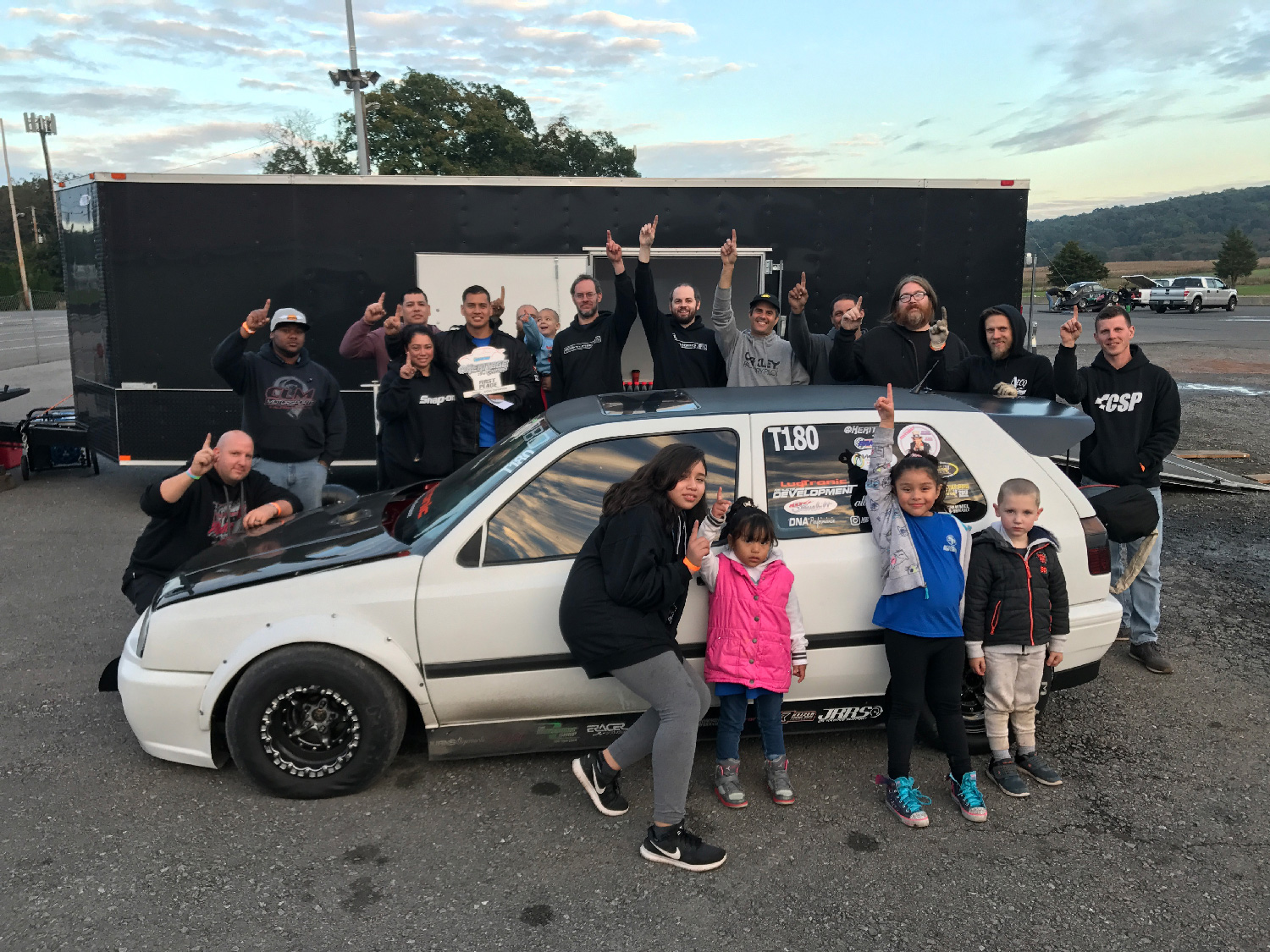 This was a rescheduled event from our June Bug Race which unfortunately got rained out. With cool crisp air everyone was looking to make some real horsepower and the staff at Maple Grove Raceway did a phenomenal job at prepping the surface. Unfortunately, we saw multiple racers breaking their transmissions and axles due to the great track surface. However, it also meant for a lot of personal best runs from a handful of racers.
We had over 50 tech cards sold for the event and 12 of those were in our AGAS Island Dub class which was run in the ¼ mile. We had 6 cars that were Air-cooled and 6 that were Water-cooled. At the conclusion of Qualifying it was Ricardo Javier Tolay with his 1998 GTI VR6 sitting on top of the field with an 8.99 @ 177mph. He was following by #2 Jerry Lewis, #3 Todd Pavics, and #4 Tim Vinkuns. We’ve had great success merging the Air and Water communities and it looks like we have found common ground and parity between the two.
With this being a double point race the elimination rounds proved to be exciting. None of the top 4 spots in the championship were solidified until the semi finals of the event. In the semifinals Ricardo took out Mike Pauciullo which put Mike 3rd in points and Tim Vinkuns 4th in points. In the final round it was Ricardo and Jerry for all the money. If you win the event you also win the championship. Both racers had their cars set on kill as they left the line. Immediately at the hit Jerry broke his transmission, however Ricardo broke his transmission at half-track but was able to coast to the win. Congratulations to Ricardo on becoming the first Water-cooled car to take the Vw Heritage Series Championship.
In our IGAS International Motor Shop class it was just as exciting. Again, we had to wait until the final round of the day to find out how the championship was going to play out. Newcomer Kevin Callahan was going rounds and shaking up the points chase. With Michael Hall and Rick Lazar out of the race Kevin would have to win the event to move into the top 4 of the championship. He would face off against long time veteran Pete Peek in the final round. Unfortunately for Kevin a red light start ended his championship run and gave the win to Pete. With that the top 4 were solidified. Taking the championship all the way from Ohio was Eric Hengstenberger followed by Eric Hellmuth in 2nd, Michael Hall in 3rd and Rick Lazar in 4th.
For Eric Helmuth he only made the last 2 races this year and he finished 2nd in the championship. We have heard racers in the past tell us they won’t join the series because they cannot make every event. This alone proves you don’t have to make every race to finish well. Your membership goes a long way in helping to provide decent payouts, a place to race, and perks like free T-Shirts. Please, we urge you. Continue to support the series and attend every event to keep this community alive and well.