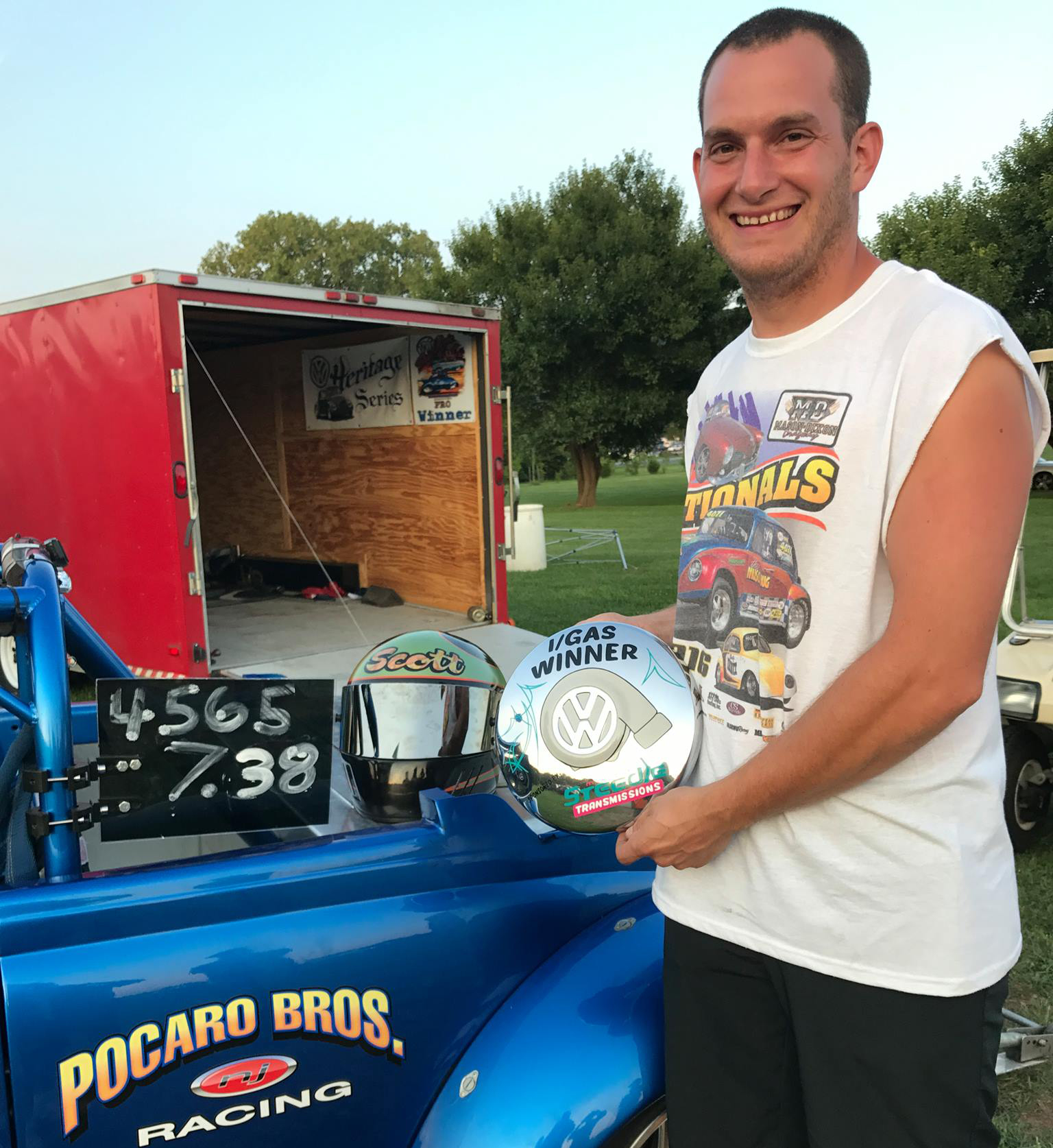 With over 70 racers onsite at Mason Dixon Dragway nestled just outside of MD, VA, PA and Washington DC its the perfect location to merge the southern racers against the northern racers. Beautiful sunny skies and a cool 80 degrees, you really couldn’t ask for a more perfect day. Not only did we have the new addition of 7 ECPRA Pro Stocks but we merged Pro Mod and Vw Heritage Series A/GAS to have a combined total of 13 entries. The Air cooled Street Car Association brought 11 cars and in our bracket classes we had 23 in I/GAS and 16 in H/GAS.

In our I/GAS 7.99 and quicker it was proving to be survival of the fittest with 23 cars making the race. We had racers as far north as Connecticut and as far south as South Carolina. In the final round it was a true North vs South Shootout. Bucky Holling in 63 Ghia from South Carolina was paired up against New Jersey’s own Scott Pocaro. With a redlight start from Bucky the race was over before it even started. Now only was Scott busy promoting the race but he did a hell of a job racing it as well. Congrats to Scott and his entire family for the support.

Attention A/GAS (Pro Mod) racers. Since our first race of the year at Bug Out got rained out we were able to find our 3rd points race of the season. Jerry Lewis made some phone calls and Rick Lindner at Maryland International Raceway was able to accommodate our class at their Summer iRev Import Revolution event on Sunday September 17th. We will have our own lane and race amongst our own racers. This will be a ¼ mile event. And to make things even better they are allowing us to race for FREE. Yes that’s right the CAR and DRIVER will get a tech card for free. Crewman must pay admission but drivers will be racing for free.

We have to give your names to the track prior to the event, if your coming please let me know ahead of time so you can be on the list. Jerry and I will be sponsoring the purse for this event. If you want to jump on board and increase the payout by all means please let me know. The more the merrier.

Once again thanks to Jerry and Rick for making this happen so we can finish our season with 3 points races. Also as a last reminder... this is for A/GAS only. If your confused about which class you run…. A/GAS is heads up and I/GAS is brackets. 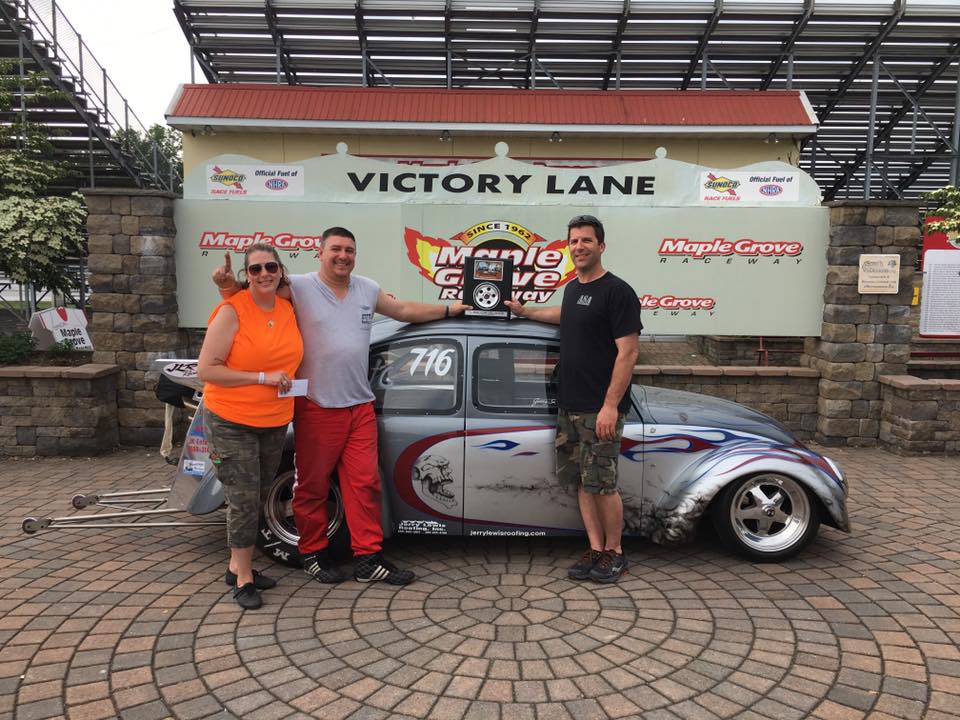 With the threat of rain in the forecast our first race at Bug Out was unfortunately rained out. Just one week later our next event had a chance of rain as well. It sprinkled on and off but unfortuantely around 430pm the track called it quits. We were down to 3 cars in the I/GAS Bracket Class and A/GAS finished earlier in the day.

In A/GAS we had 5 racers show up to qualify. At the end of qualifying it was Stephen Hawes sitting in the #1 spot with a 9.79 (1/4 mile), followed by Jerry Lewis at #2, Kirk Adams #3, Paul Wolf #4, and Reggie Lee #5. A few racers were having issues after qualifying and chose not to cause more damage and sat out the remainder of the race so the finals paired up Jerry Lewis against Kirk Adams. Jerry took the win and the points lead after Kirk had motor issues.

In I/GAS 11 racers made the first round call. Going into Round 3 it was Michael Hall, Joe Cooper and Oscar "Grumpy" Ortiz. Unfortunately the rain came at the same time and the race was called off. We have a 4 way tie in I/GAS our next race will definitely be exciting to see how it plays out.

Join us on August 5th at Mason Dixon Dragway for our next race. We will have our A/GAS, I/GAS racers there as well as ASA, H/GAS and ECPRA Pro Stock & Pro Mod. 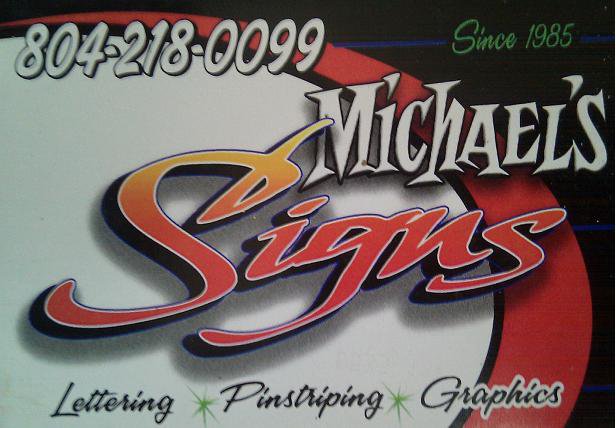 A/GAS (pro mod) Racers... We would like to welcome Michael Hall with Michaels Sign Company as our official 2017 A/GAS Series Sponsor. For the champion of this years points chase Michael will be hand painting your racing helmet. His artwork and painting skills are truly in a league of their own.

He not only paints, air brushes but also he's an amazing pin striper. Please visit his facebook page for more samples of his work. Thank you once again to all of our sponsors and we'll see you at the track. 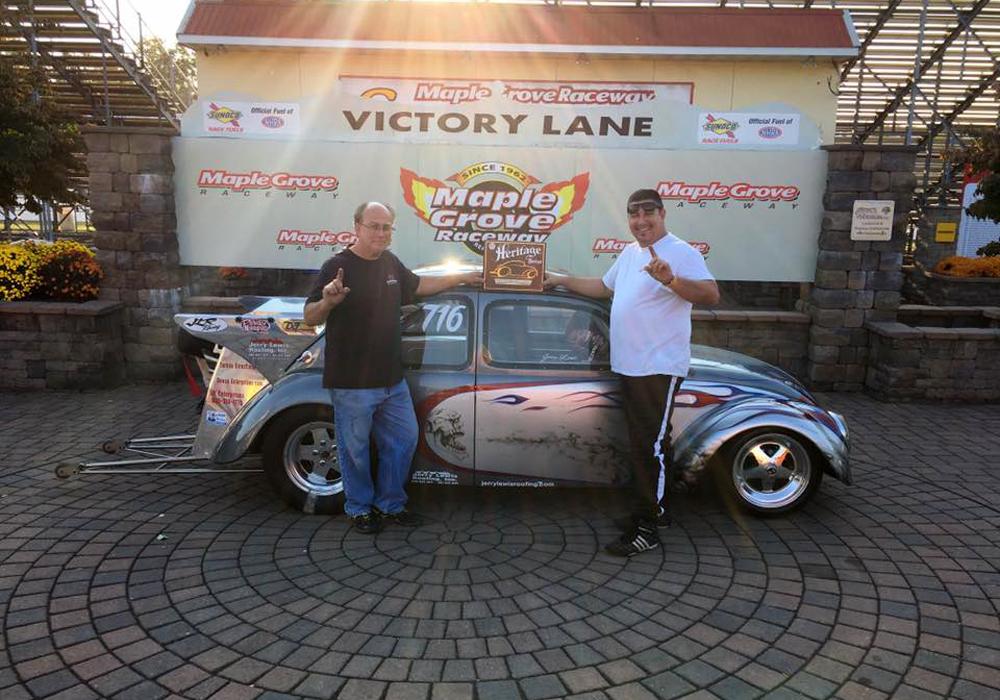 We would like to congratulate our 2016 Heritage Series champions. In our Jerry Lewis Roofing sponsors A/GAS it was none other than Jerry Lewis himself wrapping up the championship my a mere 2 points over newcomer Stephen Hawes. These two battled it out all year and it came down to the final event of the year at Maple Grove. Stephen had to take out #1 qualifier Todd Pavics in the semi final round to secure his first championship, win and you’re the champ, lose and you have to wait and see if Jerry loses in his semi final round against Reggie Lee. After Stephen missed 4th gear all eyes were on Jerry and Reggie at the starting line. Just as Stephen did Reggie missed 4th gear and Jerry cruised to his 2nd in a row championship with A/GAS. We would like to thank Jerry Lewis Roofing for sponsoring the class this year and congratulations to Jerry Lewis Racing for their consistent efforts all year long. 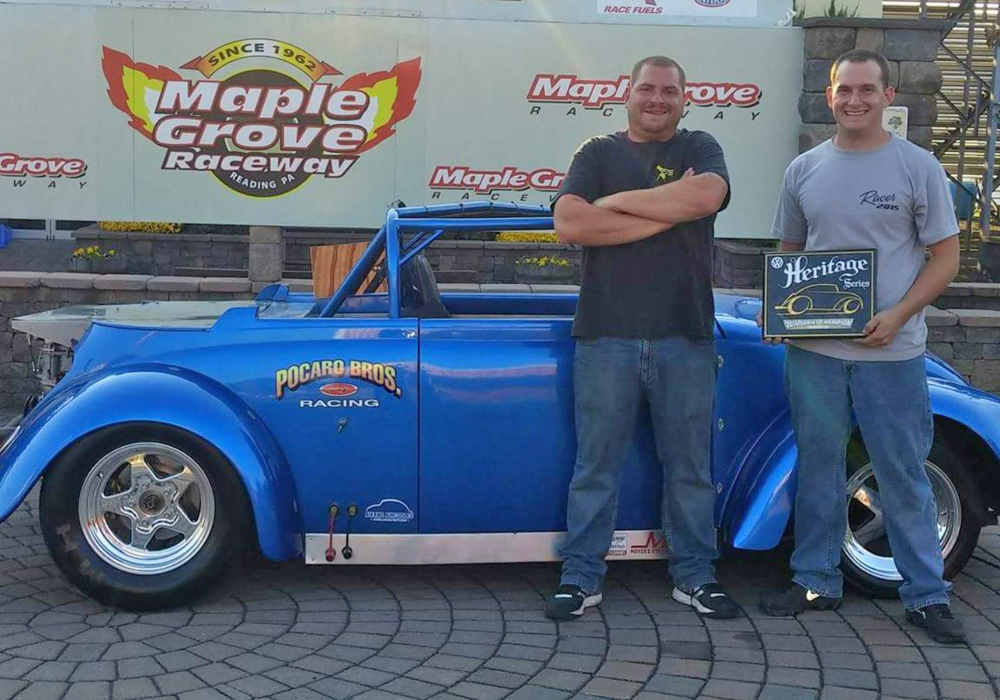 In our GelAir.com sponsors I/GAS field coming into the final race Nelson Rodriguez Jr had a 5 point lead over Scott Pocaro. Unfortunately for Nelson he could not attend the event and that opened the door up for Scott to take the championship. However it wasn’t an easy road for Team Pocaro. They ended up breaking 2 axles on 2 different runs and were thrashing to continue going rounds so they could accumulate enough points to take the championship. With a semi final appearance it was enough points to secure his first championship. We would like to thank GelAir.com for sponsoring the class and we look forward to seeing Team Pocaro in the winners circle again in 2017. Thank you once again to all of our sponsors. Without you we wouldn’t be here. Stay tuned for bigger and better things to come in 2017. 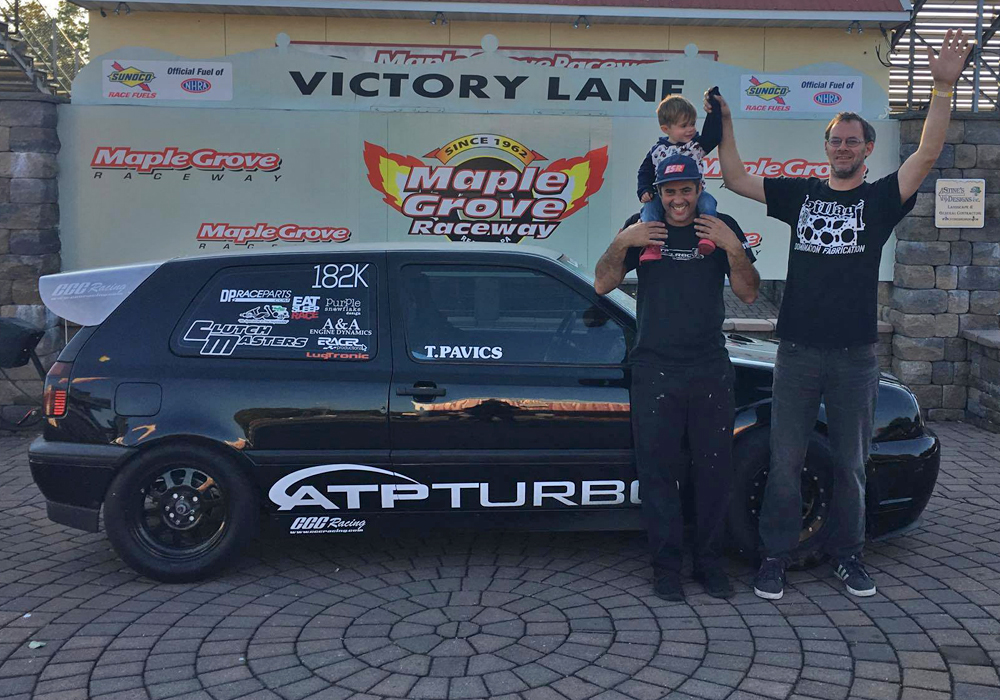 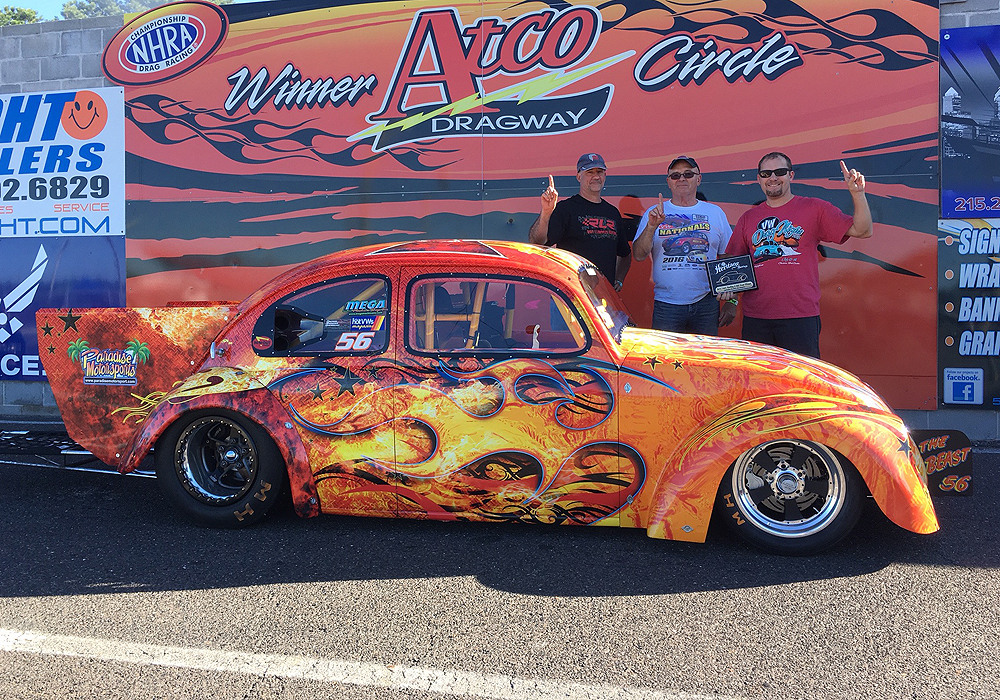 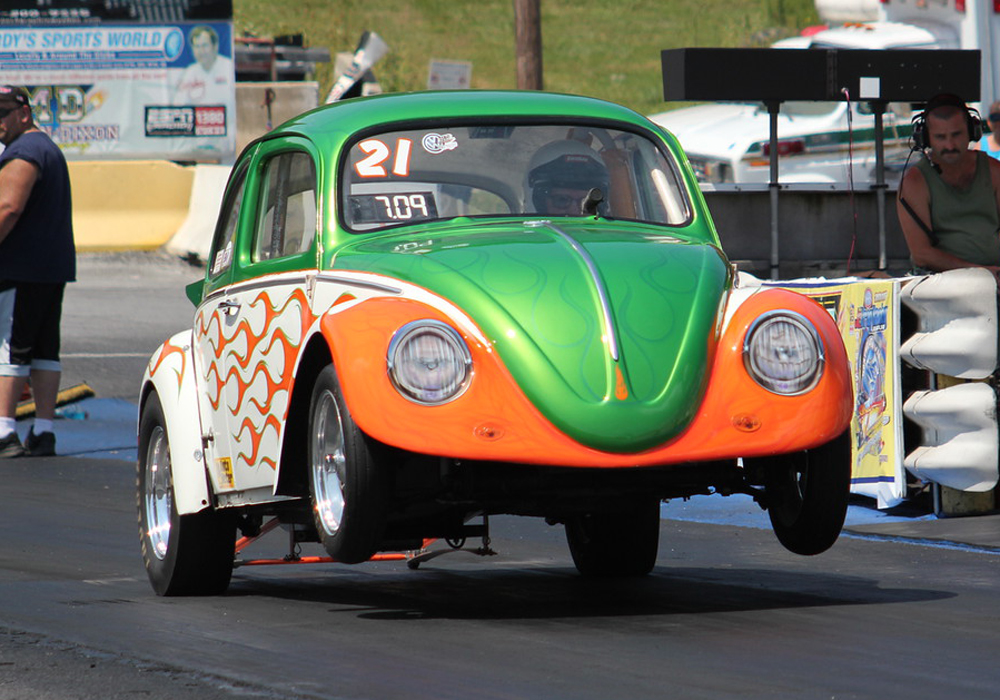 We started off with the backbone of our series the Gelair.com Sponsored I/Gas class which features 7.99 and faster bracket cars. With 17 entries in the class it proved once again to be the most competitive and largest field of the Vw Heritage Series. At the end of the day it featured a true North vs South finale. Nelson Rodriguez Jr from New Jersey was facing off against Clint Woolard from North Carolina. Over the last few years when our northern racers head down south for the Vw Drag Night event we usually take the money back north. However this year the money went down south as Clint took the win over Nelson Jr. Since Clint did not join the points series Nelson is the current I/Gas points leader with 37 points and 2nd place is tied between our fearless leader Scott Pocaro and Doug Stewart at 25 points.